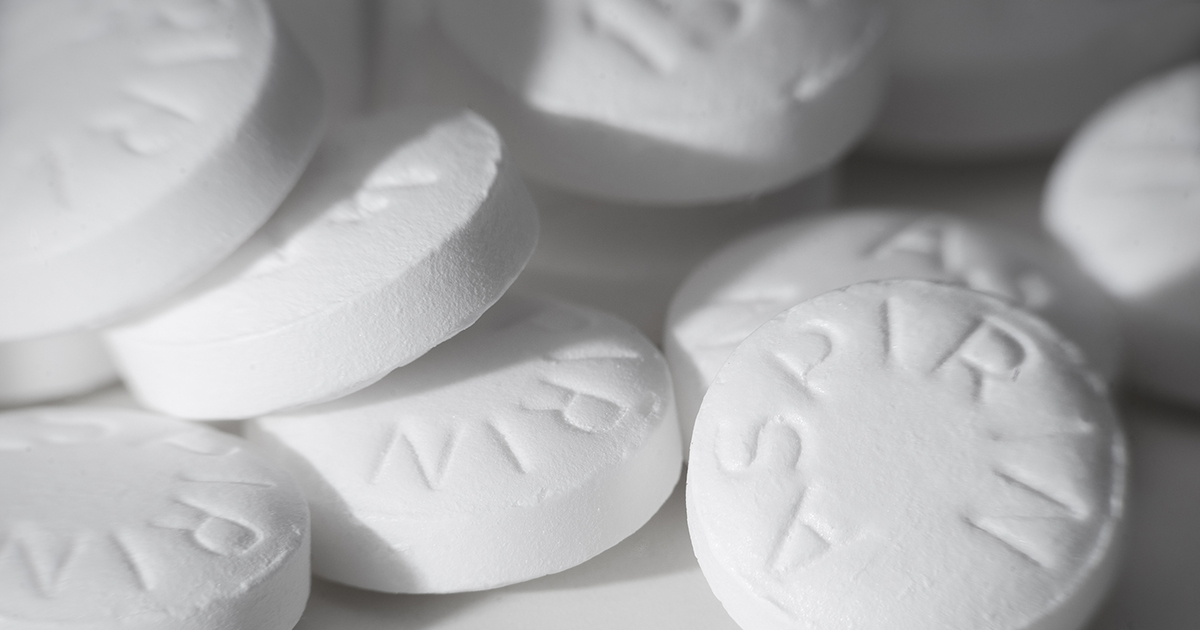 The study published in The Lancet provides definitive evidence of the drug’s long lasting anti-cancer effect in people with high risk of cancer.

The international trial- known as CAPP2- involved patients with Lynch syndrome from around the world and revealed that two aspirins a day, for an average of two and a half years, reduced the rate of bowel cancer by half.

The study, led by Prof. Sir John Burn from Newcastle University and Prof. D. Timothy Bishop from University of Leeds, is a planned double blind 10 year follow-up, supplemented in more than half of recruits with comprehensive national cancer registry data from England, Wales and Finland for up to 20 years. Dr. Harsh Sheth from FRIGE’s Institute of Human Genetics, Ahmedabad, was involved in carring out the data analysis.

The research, which began in 1996, was a randomised controlled trial to assess cancer-prevention effect of aspirin in people with Lynch syndrome.

The study involved 861 patients with Lynch syndrome, which affects about one in 200 people in the population. These people have a genetic problem with DNA repair, making them at much higher risk of cancer such bowel, womb, ovary, stomach and much more during their lifetime.

They were randomised to 600mg per day aspirin or placebo for 2 years and were then followed up annually by their doctors for any cancer that may develop.

Previous work published in 2011 whereby these patients were followed up for 5 years showed that people who were given aspirin had lower risk of bowel and womb cancers.

Now, Prof. Burn and his team followed these patients up to 20 years and found that when all original recruits were included in the study, those on aspirin had 42% fewer bowel cancers. Almost those who took aspirin for a full two years, there were 50% fewer bowel cancers.

Aspirin didn’t just reduce risk of bowel cancer, it also appeared to reduce risk of all Lynch syndrome cancers- such as cancer of endometrium or womb. There was an overall reduced risk of cancer of 24% in those taking aspirin, or 37% in those who took aspirin for two full years.

The research is funded by Cancer Research UK, NIHR, Bayer Pharma AG and the Barbour Foundation.

How does aspirin work?

The way aspirin is able to prevent cancers from developing in the first place remains to be determined. Through different observational studies, suppression of inflammation has been proposed as a likely mechanism.

Through studies in cell lines and animals, the response to aspirin suggests its influence on the cancer cell death, also known as apoptosis. Destruction of these malignant cells early on could explain why it takes years for aspirin to show its anti-cancer effects.

Yet, whether the death of cancer cells occurs via increase in apoptosis, increased policing by the body’s immune system or a combination of both requires further research.

Is this important for India?

This is of particular importance to India, whereby around 12 lakh new cases of cancers are diagnosed each year.

Many cancers that occur in Lynch syndrome patients are common in India. 27,000 and 5,000 new cases of bowel and womb cancers are reported each year alone.

Actively preventing cancers through an ‘over the counter’ and ‘low cost’ drug can help reduce cancer related morbidity and death, cost to the patients and burden on the fragile healthcare system.

Should I take aspirin?

Aspirin reduces risk of cancer and stroke but can increase risk of bleeding, particularly in old, obese and frail people.

The current study tested 600mg dose per day but similar rates of adverse reaction were seen in people who got aspirin and placebo in the trial.

The research now is focussed on finding the optimal dose of aspirin. The new trial called CaPP3 is testing the efficacy of 3 different doses- 100mg, 300mg and 600mg per day in 1800 patients with Lynch syndrome. The result of the trial will emerge in 2023.

In the meantime, the National Institute of Health and Care Excellence, which issues treatment guidelines for the United Kingdom’s National Health Service, has recently published guidelines suggesting prescribing low-dose aspirin (150mg per day) to people who are identified as carriers of Lynch syndrome to reduce cancer risk. A similar guideline has also been issued by the United State’s Preventive Services Task Force and the British Society of Gastroenterology.

There is conclusive evidence to support the use of aspirin in risk reduction of cancers in high-risk patients, bearing in mind the effect will appear at approximately 5 years after starting aspirin.

Discussing with your healthcare provider can help you decide what dose is suitable for you.

Do I have Lynch syndrome?

If you are diagnosed with bowel cancer or other Lynch syndrome cancers before the age of 50 or have a strong family history of cancer, there is a high chance of you being a Lynch syndrome carrier.

Your tumour should be tested for microsatellite instability followed by genetic testing of your DNA from blood to identify mutation that increases your risk for cancer.

Dr. Harsh Sheth at the FRIGE’s Institute of Human Genetics, Ahmedabad, is currently carrying out a research study funded by the Gujarat State Biotech Mission to detect Lynch syndrome in bowel cancer patients in India.

If you have been diagnosed with colorectal cancer, you can avail these genetic tests free-of-cost regardless of your age or family history.

Publication in the Times of India newspaper 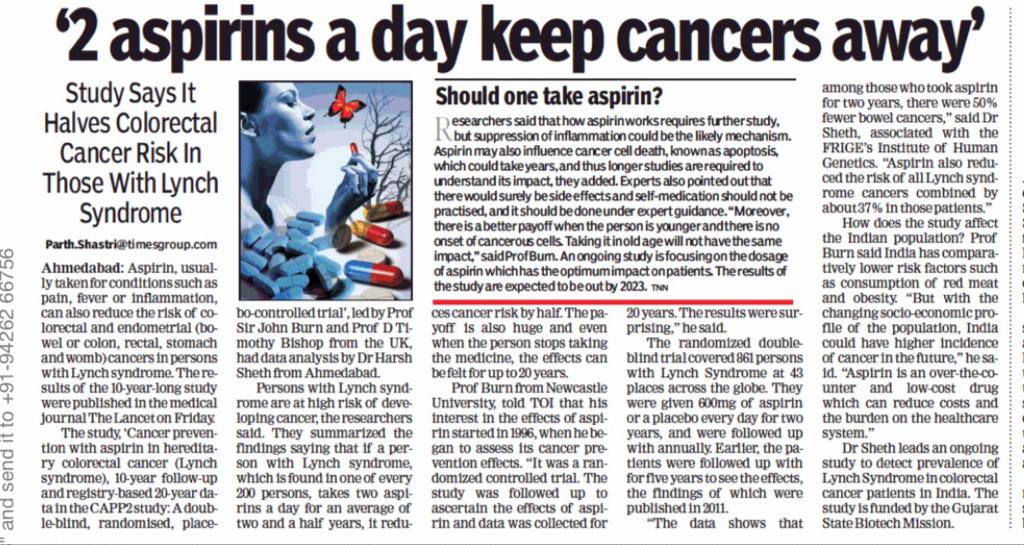 Our work is covered by the world’s largest subscription newspaper- The Times of India on 14th June 2020.